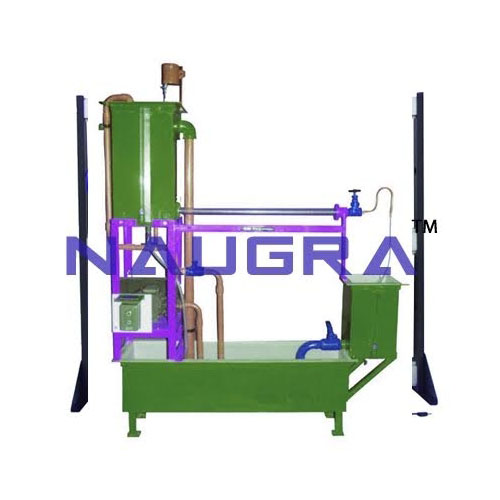 
Description:-
Sedimentation is the separation of solid particles from fluids under the gravitational force.
When a solid particle moves in a fluid.

Then the resultant force acting on the particle will be zero, and particle quickly reaches velocity, which is the maximum attainable under the circumstances and which is called the terminal velocity.
The gravitational force, acting downward.
The drag force, acting upward.
When a particle falls in a fluid under constant force, e.g. force of gravity, then particle accelerates for some time, but when the accelerating force equals the retarding force (Buoyant force and Drag force).
The buoyant force, acting upward.

When slurry is prepared in a container and then allowed to remain undisturbed for some time, four settling zones will appear as below:-
With the passage of time, the height of the different zones will vary and ultimately zone A of clear liquid and zone D of the sludge will be left.
When all the solid particles settle in zone D, then this is a critical stage and after this no settling takes place.
With further passage of time, the height of the zone D will decrease due to the compression of the sludge on account of its own weight.
Settling can be free settling or hindered settling.
But most of the slurries settle under hindered conditions.
A Supernatant Layer C Transition Zone B Slurry Zone D Concentration Sludge Zone.
Free settling is that in which the motion of one particle is unaffected by the motion of the other particle while in case of hindered settling many particles are present so there is mutual interference in the motion of the particles and the velocity of motion or rate of settling is reduced.
The present set-up with 5 Nos. of Borosilicate Glass Graduated Cylinders is designed to study the zone settling depending upon the concentration and characteristics of the particles.
These cylinders can be easily removed for cleaning.
The rate of change in height of the various liquids/solids interfaces with respect to time can be measured with the help of stopwatch.